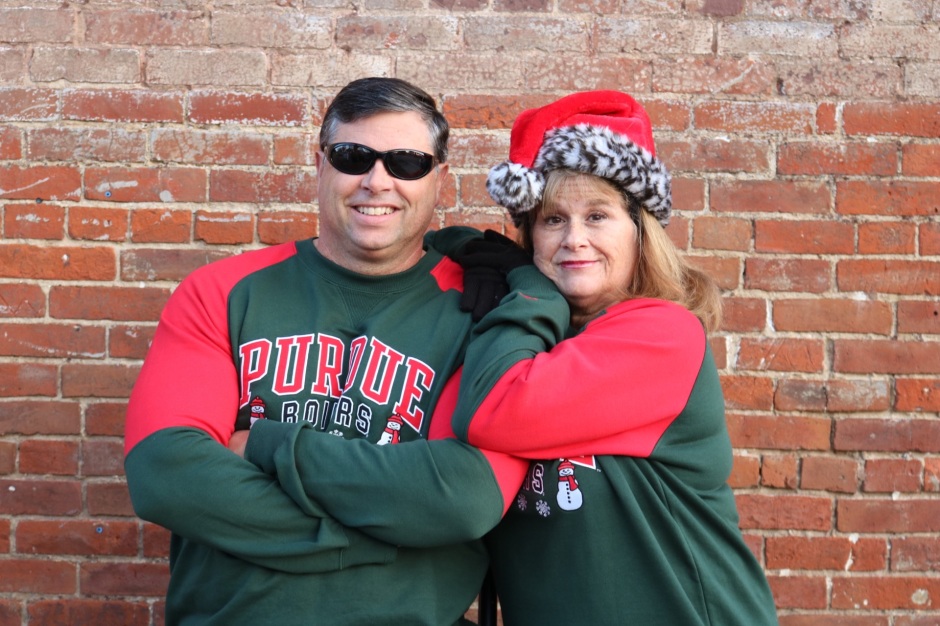 I have been seeing things with new eyes this Christmas. You know how you read something over and over again and it hits you in a different way. Well, that has been happening to me this Christmas. First of all, one of the main verses that has hit me with new meaning is Matthew 1:23. “She will give birth to a son, and they will call Him Immanuel, which means “God is with us.”

Most of my childhood and even into teenage years and adulthood, I felt very alone. I spent hours with other people but still felt very alone. I honestly didn’t realize that God was with me. And now this Christmas I realize even more that He is with me at all times no matter what is happening. I can see His great love for me even clearer than I have ever seen it before. The God of the Universe is with me through panic attacks, fear, times of despair, and well basically everything! I am finally realizing that fact. WHEW! Genesis 28:16 says, “Surely the Lord is in this place, and I wasn’t even aware of it.” That would be me!

I have always been a performance driven person. It has been a curse for me because I will drive myself into the ground to get things done. But I am learning that isn’t what Jesus wants for me. He wants me to be content just being with Him. He wants me to remember that I am His child. Ann Voskamp says, “God doesn’t want to number your failures or count your accomplishments as much as He wants you to have an encounter with Him.” She also says, “Why profane His coming with fleshly performance, frantic pushing, futile preoccupations?” He just wants me to sit and look at Him in wonder as the shepherds did the night He was born. He wants me to experience the wonder in having a relationship with Him. The fact that God loved me and you so much to send Jesus to be the ultimate sacrifice so we could spend eternity with Him is completely mind-blowing to me. Jesus came as a baby and would grow into a man who would ultimately have to die for all of our sins is almost too much to believe sometimes. This is what I would call “true love.” God came down to earth that night because He loved us so much! Just sit in the wonder of that for a few minutes. Think about it. There is so much to be grateful for!

And the fact that He loves us so much makes me think about His heart. Have you ever just sat down and thought about God’s heart towards you? I have been doing that a lot lately. Because I experienced a difficult relationship with my father all of my life, my thoughts about God’s heart were tainted by my experiences with my earthly father. I am now seeing God through new eyes. Deuteronomy 5:29 says, “Oh, that their hearts would be inclined to fear me and keep all my commands always, so that it might go well with them and their children forever!” God is looking at us as a father. He wants us to have hearts that are inclined to hear of His love for us. I realized as a parent that when I gave my children rules it wasn’t because I wanted them to just obey me. I wanted them to keep those rules because I knew it was best for them to follow them. I knew if they didn’t follow them they would suffer and I didn’t want my children to suffer. God is the same way. He loves us so much that He gives us His words to live by because He knows if we don’t, there will be consequences. Everything He does is from a loving heart. He is the ultimate father who gave His one and only Son to us. Jesus came out of love for us. Again, my brain has trouble understanding that kind of love. But, I am so extremely grateful!

And because of His great love for us, God didn’t choose nobility to fill His bloodline. He chose people who were just like you and me. He chose brothers who hated each other so much that they almost killed each other. He chose people who played favorites. He chose a prostitute. He chose a widow. He chose men who were willing to pass their wives off as sisters so they wouldn’t get killed. He chose brothers who sold their brother into slavery. And then He chose a young shepherd boy to be king. God chose the most unlikely people to be in His family tree so we could understand that we don’t have to be perfect. We just need to be forgiven. And for that I am also grateful!

I just have to share what Ann Voskamp says that has encouraged me so much this Christmas. “Every little thing is going to be okay because God is working good through every little thing. All that’s happening is happening to make miracles. The mundane is what’s making miracles.” It is so easy for me to get caught up in the mundane and what isn’t happening every single day, but God wants me to be looking at Him and trusting Him for the miracles. He wants to take the mundane and make something beautiful out of it. Just look at what He did with Jesus’ birth! He took a normal couple and called them to be the Mom and Dad of Jesus. Instead of having Jesus born in a palace, He chose a stable with animals. He humbly came unnoticed by most. God showed us that night what He can only do. He chose the mundane to produce a miracle. Again, I am beyond grateful!

Christmas is about the love of God. He sent His one and only Son to us to redeem us from our sins. He gave us the greatest gift we could ever get. The chance to open up our hearts to Jesus and let Him into our lives and accept Him as our Savior so we can live with Him forever! Ann Voskamp says, “The miracle of gifts….is never not coming. When your Father’s hand isn’t readily apparent, it’s only because He’s readying gifts. Gifts always come out of the unseen and hidden places.” I can tell you that a lot of my gifts have come out of some dark places in my life. Places I didn’t like living in, but I am so grateful that God has taken them and made them into good gifts.

This is the message of Christmas. Jesus was born in a stable to become a man who had to die on the cross for our sins. He wants a relationship with you. He wants to share your life with you. He wants to forgive your sins for you. He wants to live with you forever. He loves you. No matter what has happened or happens to you, He is with you. He enjoys being with you and He wants you to feel the same. If you are struggling, reflect on Him. Look for Him. Pray to Him. Talk to Him. The simplicity of His birth is quite amazing. The God of the Universe came down that night to live among us. And for that, I will be eternally grateful.

“It is good to be children sometimes, and never better that at Christmas, when its mighty Founder was a child himself.”  Charles Dickens